Independent Counseling in the districts of Oldenburg and Vechta: confidential, free, supportive

We explain letters of the Jobcenter and employment agencies, provide counsel on ALG (Unemployment Benefit) I and II, housing benefits, school fees, jobs, job search, qualification and much more...

Costs for school books are covered!

If you have children of school age and receive benefits from the Job Centre, the costs for school books are covered (this does not apply to school books that can be borrowed). This is in addition to the money for school materials, which is paid out regularly in August and February. All you have to do is submit an application and attach supporting documents (school book lists and receipts). If possible, pass this information on to all those who could also be eligible.

The video "EU Freedom of Movement" deals with the various rights of freedom of movement and their impact on entitlements to social benefits.

The video "EU Freedom of Movement for Family Members" deals with the situation under residence and social law of family members who join EU citizens living in Germany - including third-country nationals.

The videos were produced by the welfare organisation Paritätischer Gesamtverband. They have subtitles in Bulgarian, Croatian, English, French, Greek, Hungarian, Italian, Polish, Romanian and Spanish. The languages of the subtitles can be selected directly on youtube under "settings".

The text for the video in all these languages can be downloaded here as a pdf file.

We think: Instead of cutting, Niedersachsen should increase its spending on migration counseling in order to strengthen social participation and

The Guardian has published several articles about the conditions of migrant workers in the European meat industry. The investigation shows that the system is based on exploitation of workers.

Job center has to pay computer for schooling

On February 1, 2021, the Federal Employment Agency (BA) has instructed the job centers to cover the costs of "digital devices" for all students who receive Hartz IV. As a rule, up to 350 euros per student are paid for a tablet, PC or laptop including additional gadgets such as a printer (usually only one printer is cover per household). All students of vocational or general education schools up to the age of 24 are entitled to this. The students need to prove their eligibility using a certificate from their school stating that the digital equipment is necessary in order to participate in distance education and that it is not provided in any other way, for instance via rented equipment. Even if the need for help is only due to the need for a PC and no benefits are currently received, the needs must be by the job center. The directive applies retrospectively to January 1, 2021. [read more]

Information about corona and labour law 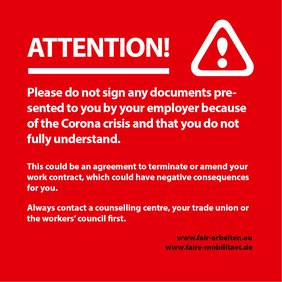